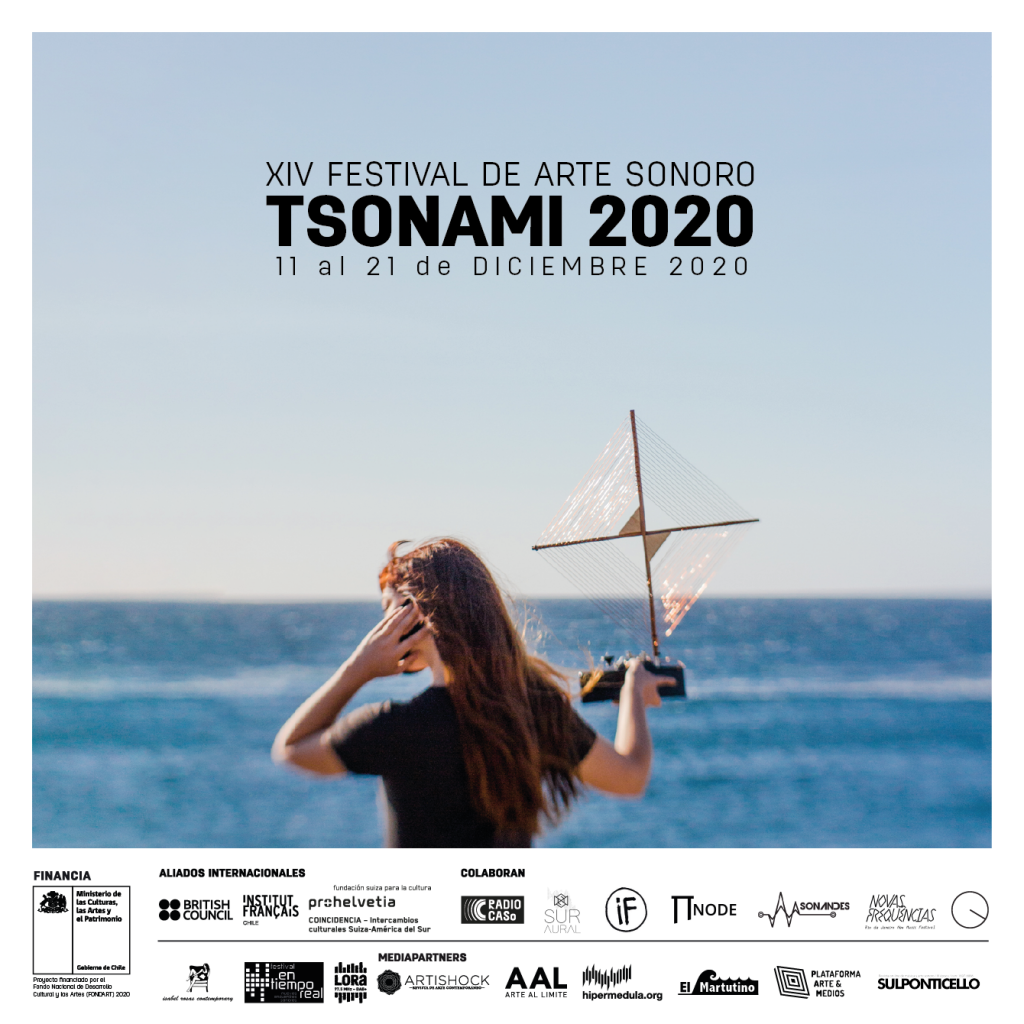 At its XIVth meeting, for reasons of public knowledge, the festival took place through a broadcast channel that is Radio Tsonami.

Between December 11 and 21, the XIV edition of the Tsonami Festival of Sound Art will be held, funded by the National Fondart 2020 call of the Ministry of Cultures, Arts and Heritage, through the radiotsonami.org platform as a place of meeting and collective listening.
176 artists participating in this edition, from different parts of the world, with more than 80 works exclusively commissioned for this meeting.
Within the programming, specific activities were prepared such as the transmission of two astronomical events, the Solar ECLIPSE and the Summer SOLSTICE, on December 14 and 21 respectively, thus closing the festival.

Radio Tsonami will broadcast non-stop, 24 hours a day for 11 days, the complete program of the Festival, which includes works by 176 artists from Latin America and the rest of the world and has a design of 80 live broadcasts and a total of 77 works created exclusively.

For the two astronomical events that will take place during the Festival, artists such as Nicole L’Huillier, Thelmo Cristovam, Cristián Espinoza, Victor Mazón, Jorge Olave will participate with radio works, and with spaces for reflection on the phenomenon and symbolic scope of the eclipse from narratives non-hegemonic, José Pérez de Arce, Mairemi Pita along with Ozzo Ukurami (Bolivia) and Gastón Sublette.

But as usual, since its inception, the Residences of creation in Tsonami are not absent. In this edition, there are five artists summoned to be part. Agnes Paz, CePam, Javiera Ovalle, Ivo Vidal and Rodrigo Araya, are the artists who will give shape and display to pieces and sound works during the course of the residency to later be exhibited at the Festival.

The Festival has a series of collaborations with international curators and projects.

Canadian Eric Mattson curated a series of 3 radio appearances by artists from China, Canada and France.

Dinah Bird, a British artist living in France, will conduct a simultaneous trans-continental radio walk with 5 other live artists.

Radio CASo + Radio IF from Argentina, propose two radio actions for the festival of long duration and with the presence of the public in the neighboring country.

In addition to creations in collaboration with the COINCIDENCIAS program (Switzerland) with the participation of the artists Joerg Koeppl, the artist Sarina Scheidegger and the Chilean resident Rodrigo Toro.

For the zenith of the festival, a program dedicated to the Summer Solstice with a 12-hour radio ritual that will consist of a vigil awaiting the astronomical phenomenon. For this reason, artists with radio interventions such as Valentina Villarroel A., Anna Friz, José Miguel Trujillo, Jeff Kolar, Michel Poblete, Ozzo Ukumari and Sebastián Jatz will participate.

The Tsonami Sound Art Festival 2020 is funded by the Ministry of Cultures, Arts and Heritage through the National Fondart, 2020 call. The support of the British Council, French Institute of Culture and the Swiss Foundation for Pro culture Helvetia in the framework of its program in South America Coincidencia.